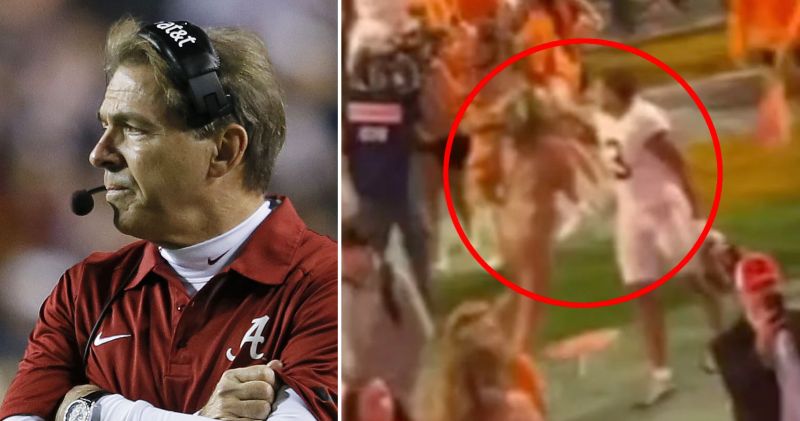 In doing so, the Vols ended a 15-year losing streak against Nick Saban’s program and established themselves as one of the top two teams in the SEC.

Due to the stakes, Tennessee fans were thrilled after the game. They immediately stormed the field, before the Alabama players could officially make their exit.

This led to a particularly delicate situation.

In a now-viral clip, many believe they saw Crimson Tide wide receiver Jermaine Burton hitting a Tennessee fan after the outing. The clip speaks for itself:

Jermaine Burton hits a girl in the head after the game pic.twitter.com/6DeqPYJ5WK

Impossible. They are as pure as packed snow in all of Alabama. Clearly doctored video.

Just a bunch of sore losers

I guess you’re one of those “She had him come” guys.

If it’s legit…you need to turn it over to the proper authorities and have them investigated. He should end up at least being suspended for his actions.

Worse still, Burton also found himself in hot water after the fact during a separate meeting with a fan:

Man did you see the first lol. He hit 2 people pic.twitter.com/mw8kisoxmu

Burton finished with two receptions for 49 yards against Tennessee, but that’s obviously not what people talk about after the fact. Time will tell if the Crimson Tide addresses these videos in any capacity.

The fans were on a different level last Saturday. A Vols fan was clapping so hard her shirt flew off. Another found her own unique way to leave an impression.

That being said, players getting their hands on fans is next-level stuff.

Someone should answer for these videos.

Will Nick Saban do it at some point this week?

Time will tell us.

Prime Video will show the NFL “Black Friday” game in 2023