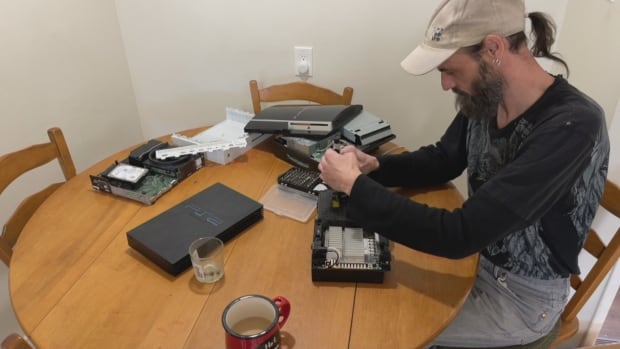 An Albertan who asked the community for help on Christmas Eve is now helping others in need for the fourth year in a row.

Jasen Kerr, a single father recovering from cancer and struggling with his savings, had bought a few PlayStation 3 games as gifts for his children.

â€œChristmas, we didn’t have much,â€ Kerr said, recalling the circumstances that led him to start. Jay’s charity for families in need.

Kerr put out a cry for help on social media and by morning he had four consoles and a hundred games.

â€œThat day I gave the other three consoles and a bunch of games to other families I knew,â€ he said.

Her charity collects donations of video games, consoles, computers and more, repairs them, and then donates them to needy Edmonton-area families just in time for Christmas morning.

In its second year, the association distributed 11 consoles and in the third year, 14.

â€œThe massive response to some of the announcements I have posted for donation requests is absolutely amazing. And this year, I’m surprised how many people have reached out to us for help. “

He uses Facebook to find people in need, posting messages asking for applications from families and people who have asked for help.

Kerr’s spare bedroom at his home in Gibbons, Alta., About 35 kilometers northeast of Edmonton, is full of donated video game consoles, games and electronics. He works all year round cleaning, repairing and testing them.

With the help of volunteers, he aims to deliver packages containing a console, controllers and several games to more than two dozen families by Wednesday.

Much of the equipment and games are old versions, but Kerr says it’s still a special experience for kids.

â€œI wouldn’t say proud, but I’m honored to be able to help these people,â€ Kerr said. â€œBecause I had help at one point, so I know what it feels like to want to provide for your kids.

“For me it’s not about the parents, it’s about the smile on the child’s face when he is able to open something and see thatâ€¦ hey, it’s not so bad . “

Once all the presents have been delivered and they are safe under the tree, Kerr says he will get back to work to prepare for next year.