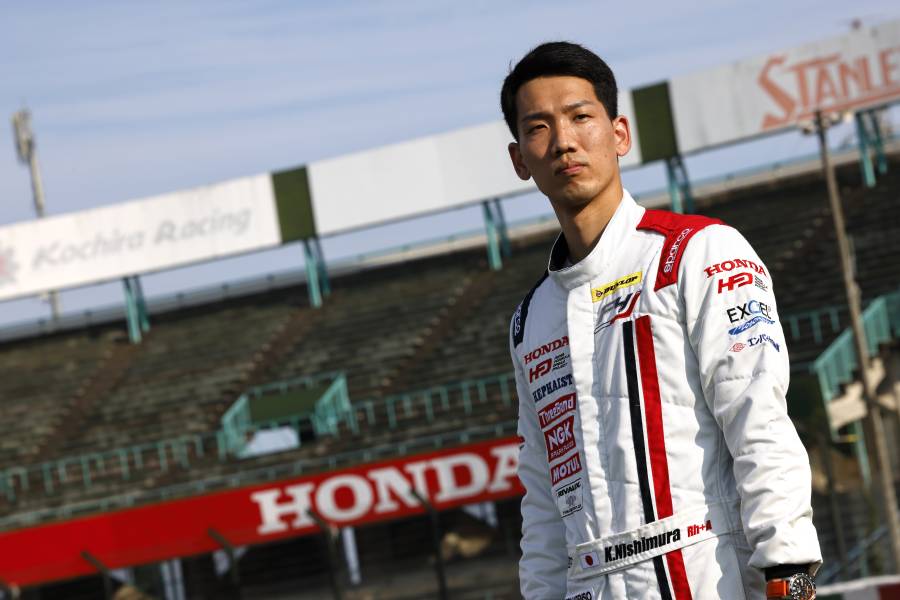 Kazuma Nishimura, an HFDP debutant at the FIA-F4 series from this year, made his name known to everyone as the first real action of the season began.

The 1st event of the season (R-1 and R-2) at Fuji Speedway was literally his first campaign in the series, and he scored the fastest time among the 20 participants in the Group A qualifying session, thus sitting at the front. row of R-1.

But in the race, Nishimura’s fate suddenly deteriorated. Starting from the front row, he battled for the lead with poleman, teammate Shun Koide, and went so far as to push his older comrade into a spin.

Nishimura received a penalty for the accident, which sent him back deep in the field and finished 28th in the race. He ruined not only his superb performance on the first try, but also the run of his teammate who was considered one of the best contenders for the championship title in the series. It was a mistake that should never have happened, and Nishimura’s first run went from heaven to hell in one fell swoop.

“I don’t have a future if I haven’t done results this season, and that made me impatient I think. I’m terribly sorry for Koide and many other people involved. said Nishimura reflecting the accident.

While the majority of young drivers in recent years start karting as soon as they are old enough, Nishimura only became aware of the fun of motor racing when he left high school. It is late flowering. An eccentric, in other words.

“Baseball took me until I graduated from high school. But I also love cars. It’s an influence from my dad. I watched racing videos and played racing simulation computer games when I wasn’t playing baseball. My dad noticed my addiction and showed me the SRS flyer. It was when I retired from baseball in high school and I got a driver’s license. “You don’t want to try that, do you? he said. I’ve never tried driving on a track before. But I was kind of fascinated by it. ‘idea.

He took the plunge into SRS-F (Suzuka Circuit Racing School, now called Honda Racing School – HRS) in 2018. Despite his inexperience in racing, he was not far behind in the rookie class, however, it was too hard for him to go to the advanced class. Nishimura already captivated by the pleasure of racing asks for the support of his father to make way for a racing team at Suzuka. Father and son got in touch with WEST RACING CARS and arranged the mid-season entry into the Clubman Sport class of the Suzuka Clubman Race.

Having experience in active racing at VITA, Nishimura returned to the SRS class next year, however, he was unable to pass final selection again. Such a setback did not discourage his passion. He had his third SRS-F lesson between the COVID-19 pandemic and eventually moved on to the advanced class in 2021. His performance was in the passing zone for the scholarship, but he was unable to produce a result in the final selection race. in which Yuto Nomura and Souta Arao took the opportunity to challenge the French F4 champion ship as part of the RedBull junior team.

“I was really disappointed, of course. Why not me? I was convinced of myself after all, said Nishimura.

Although the purse was narrowly missed, his score was good enough to pave the way for a race in HFDP’s FIA-F4 series. Nishimura aspires more and more to go abroad, and inevitably becomes jealous of Nomura and Arao who will race in France. But he thought, “I’m going to have to do my best and get results no matter what. That’s only the way I can do for now. Nevertheless, it was not totally immune to the inner hoop.

“I will be twenty-three this year. Nomura and Arao went to Europe when they were sixteen or seventeen. Most of the other HRS interns are teenagers. I can’t help but dwell on my age.

Indeed, he was too excited for that rush or hustle he preferred, which led Nishimura to the unthinkable mistake in his first race.

“I was thinking too much about age and it certainly didn’t play a role in the season opener. My teammate Mitsui (Yusuke) will be twenty this year, and can’t help but compare my age. “I am three years older. If I don’t get a result this year, I’m screwed. That’s how I thought. In addition, I made a good start from the front row in R-1, and that made me swell. That’s why I messed up with Koide.

Things turned sour for Nishimura in the 1st event in early May as his teammate and even rookie, Mitsui, had done a good job, winning R-1 and 2nd in R-2. A stark contrast put under the nose of Nishimura who was caught in the trap of overthinking.

But Nishimura soon realized that the mistake was due to latent desperation, and calmly threw himself into preparations for the races to come. He said: “I looked at any data, video or anything related to the 1st event, and I felt like I was in pretty “good shape”. It means, “I shouldn’t read too much in the outside world.” I have to focus on my own performance, raise my game and face the race with such a mindset. That’s what I told myself. »

The upcoming FIA-F4 event was the 2nd double-header of the season held at Suzuka Circuit on May 28-29, where he secured the 3rd grid in R-3 and R-4, the finished 4th and 5th respectively and placed 6th. place in the points classification. Has Nishimura reassured his true personality? But how much?

“He looked full of vigor in the first test. I thought, “great!” really. As I noticed that he had a tendency to exaggerate, I told him to “just hold back a little”, then he held back until the end. Sometimes he would put gas in before completing the cornering motion and therefore lose traction. He has a so-called “natural speed” but lacks experience. That’s why he struggles to control maneuvers properly. But I’m sure he’s getting better little by little. He has such an ability to adapt. When he adds to his experience of real battles in racing, the results speak for themselves. He has the speed to get there.

Nishimura, after the first two events, said: “It’s good to have results. But I was frustrated that I didn’t get on the podium when Koide and Mitsu did twice each. I was pissed to get me out of the chicken at the crucial moment. I haven’t done a race kart so I’m not good at racing tactics. I’m backing up too soon. I know that I am sometimes abrupt to push or not to push. All these faults of mine must be overcome as soon as possible. There are a few months left before going to the 3rd event. We will have tests at Autopolis and I will participate in the 24 hours of Fuji Super-Endurance during the intermission. So, I would like to do a few more kilometers and accumulate my experience as much as possible.

Nishimura strives to overcome age-related anxiety, as well as having all of his speed and experience become instrumental to the outcome. Let’s wait and see how the 23-year-old rookie would perform in a full two-month gap before the next event.