Kurt Angle confirmed as playable character for wrestling of all time

WWE Hall of Fame Kurt Angle has revealed he will be a playable character in an upcoming video game. It will be a wrestling card game known as All Time Wrestling, which heads to Kickstarter in April 2022.

Kurt Angle revealed the news via social media, saying, “Very excited to announce that I will be a playable character in the next All Time Wrestling (ATW) card game coming to Kickstarter in April 2022. It promises to be a playable character. to be one of the best wrestling games in recent memory. Visit alltimewrestling.com ”

The video game description reads: “ATW is a card and dice game that brings the fast-paced action and excitement of pro wrestling to your table. Starring exciting fantasy characters and real-world legends like Kurt Angle, ATW is accessible to tabletop players and newcomers alike with standard and advanced game modes!

All Time Wrestling has confirmed that there will be four wrestling legends available in the game. However, at this time, only Kurt Angle has been announced as one of the featured legends. There will also be four fantastic characters created specifically for this game. Two of these characters have been revealed and they are called Jay Felix and Mukandi Shumba.

In July, Kurt Angle was announced for another game. This was to be part of The Wrestling Code, which was created by Virtual Basement. This game features a wide variety of well-known names including Raven, Brian Cage, Brian Pillman Jr, Killer Kelly, Lady Frost, Thunder Rosa, Lance Storm, Kenny King, Matt Taven, and Justin Credible.

Kurt Angle is no longer under contract with WWE, however, he has previously turned down the opportunity to work with both AEW and Impact Wrestling. However, he recently mingled with many AEW wrestlers when he was on the recent Chris Jericho cruise.

Very happy to announce that I will be a playable character in the next wrestling card game called All Time Wrestling (ATW) coming to Kickstarter in April 2022. It promises to be one of the best wrestling games in memory. recent. Visit https://t.co/oEDSwRL2Hh https://t.co/5q024dRnyb 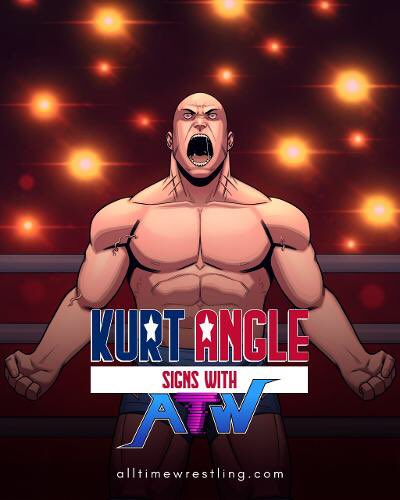