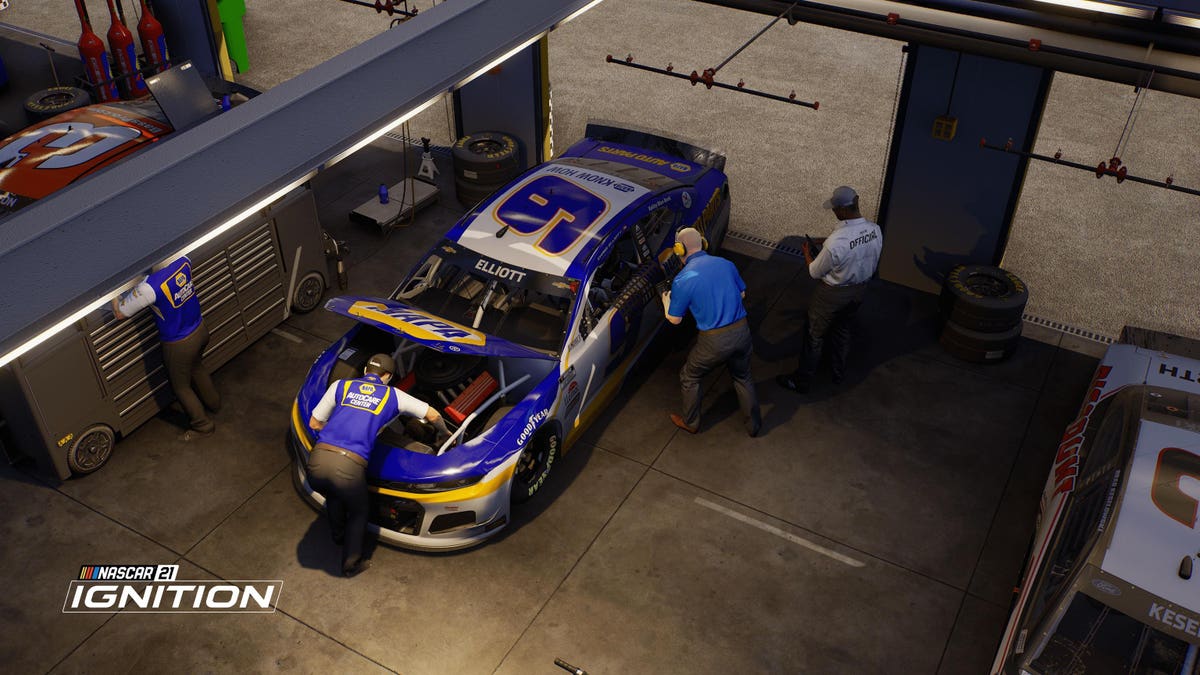 Motorsport Games is completely revamping Nascar video games with the launch of Nascar 21: Ignition, due out October 28, with pre-orders available starting August 12.

The all-new Nascar game will be completely different from the previous Nascar video game series, which was a recreation of the Nascar Heat from the early 2000s. The all-new simulation will be powered by Unreal Engine and Studio 397’s rFactor physics engine, offering users a more authentic driving experience, immersive gameplay, dynamic AI and stunning visuals.

“This is our new foundation,” said Dmitry Kozko, CEO of Motorsport Games, in an exclusive phone interview. “It required a huge investment from the start. Before, our previous foundation could build a two-story house. This one, we are planning to build a skyscraper.

This is Motorsport Games’ first Nascar game released on its own after acquiring 704 Games in August 2018. Kozko did not say how much money the company has invested in creating the game, but he said it ‘they “spent a lot more” than in the past. with the intention of using the components as the future basis of their portfolio.

Since the Nascar season ends just days after the game’s release – with the season finale at Phoenix Raceway on November 7 – Motorsport Games will be offering players a free upgrade to the Next Gen car in 2022. There will have a free upgrade path for all consoles, on current and next-gen platforms.

“When we took over 704 Games, we realized the product needed a complete overhaul,” said Kozko. “We have already started this work in 2018, and it is the product that is the result of this work. We are releasing a game that we can proudly say is from scratch. We don’t use the old components, and that’s a very important title to us.

“Next year’s game will always come out with Next Gen cars and what it takes to represent this season.”

Besides the Champions Edition, the Motorsport Games team wants Nascar 21 to be really authentic like a Nascar race weekend. There will be elements similar to real life, like teams pushing cars out of the garage, through the pits and more.

“The second part is how good the game feels on the track. We’re just happy to take the best of the best and not get stuck with the old technology we’ve been exposed to.

The new Nascar game will also feature a redesigned paint booth, improving a user’s ability to create their own paint scheme.

“We have made sure that while we give a user a full range to fully express their paint schemes, we keep the actual settings that identify a Nascar scheme from other schemes,” Kozko said. “One of the ways is how a number can be manipulated while still staying within Nascar guidelines.”

There will also be pre-race preparation and broadcast-quality post-race reruns. The voiceover work to be broadcast is provided by Nascar’s MRN Radio broadcaster, Alex Hayden. 23XI Racing’s Freddie Kraft, who is Bubba Wallace’s watcher, will be the watcher’s voice in the game.

Nascar 21: Ignition will also include an original soundtrack with artists Lynyrd Skynyrd, Imagine Dragons, Aerosmith and Luke Combs. Additionally, online racing will feature a full 40-car field, offered on every console, including Steam.

The career mode in Nascar 21 will also be different from previous Nascar games, Kozko said. There will be a clear path that forces drivers to build a reputation – just like in real Nascar life – along with driver-focused progression, clear goals, and structures on the road to glory.

“Our partners at Motorsports Games have devoted an incredible amount of talent and resources to completely redeveloping the game and delivering a product our fans will be delighted to play,” said Nick Rend, General Manager of Games and Sports. at Nascar. “Nascar 21: Ignition uses Epic’s Unreal Engine to bring the most realistic Nascar racing experience right into the homes of our fans, while presenting Nascar-style racing to a wide audience of gamers.”

Kozko said that because the game is releasing so late this year, the next game will be released earlier in 2022. He compared this year’s release date to the past with the Nascar Heat series, which typically releases in September in addition to Nascar. Heat 5.

“It looks like this is the time when we have the most data on user behavior, how the Nascar season is heating up towards the end and what it does to demand,” Kozko said. “There were logistical things that went into creating the content that the NASCAR season represents.

“The goal is to get closer to the beginning [of the season] because we think it’s something that could benefit our fans. We didn’t want to release a Nascar Heat 6 in September or even earlier just to make the next one wait. We wanted to get it out faster, which meant it took longer.

While Kozko said they never released a Nascar game until July, he’s curious to see what the data would look like.

Not only is the Motorsport Games team already working on next year’s Nascar game, they will also continue to work on Nascar Heat Mobile, as well as a Nascar game for the Nintendo Switch.

In July, Motorsport Games also formed an official partnership with the NTT IndyCar series to be its official developer and publisher of video games. Although this game will not be available until 2023, it is a vital step as Motorsport expands its portfolio in motorsports.

Monster Games and 704 Games first combined their efforts in 2015 to recreate the popular Nascar Heat series from the early 2000s. With the acquisition of 704 Games by Motorsport Games, Nascar Heat has grown in popularity significantly.

Nascar worked exclusively with EA Sports from 1997 to 2008, producing several video games. However, after the license agreement was not renewed and the quality of the games declined, Nascar needed a new partner. Eutechnyx released Nascar games from 2011 to 2015, but the games weren’t popular with fans due to its lack of realistic racing.

Monster Games and 704 Games combined their efforts in 2015 to recreate the popular Nascar Heat series from the early 2000s. With the acquisition of 704 Games by Motorsport Games, Nascar Heat is gaining popularity.

Motorsport Games raised around $ 60 million after its IPO in January, selling around three million shares. The company also just announced that its head office is under construction in Miami.

Last year, in the midst of the Covid-19 shutdown, Motorsport Games hosted a virtual world 24 Hours of Le Mans race with renowned drivers, such as Juan Pablo Montoya, Fernando Alonso, Jenson Button, Max Papis and Moreover. In addition, Motorsport Games now has a 10-year rolling license agreement with the Automobile Club de l’Ouest for Le Mans and has just signed an agreement with the British Touring Car Championship.

NASCAR returns to console video games, with the Unreal Engine