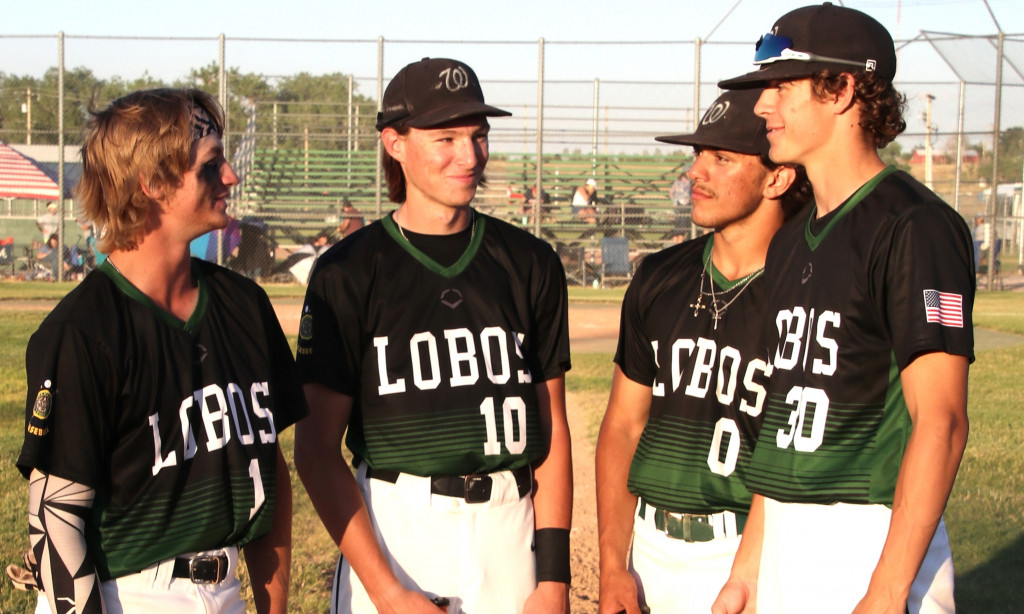 WHEAT –The Lobos have lost eight of their last nine games and last week went on a five-game losing streak as they head to the East District “A” tournament in Douglas.

They will be hoping their chances will turn as they are excited to enter the new post-season schedule.

In Game 1 of the Douglas Tournament, Aidyn Saucedo allowed just six hits for the Tigers and the Lobos could never get a man to the plate after the second inning. They blocked seven runners in the contest. Jake Hicks was the Lobos’ losing pitcher. The bright spot of the game was Ryland Petroski who went 2-3 at home plate.

In Game 2 on July 9, the Lobos had the unenviable task of facing a tough Powell team that had 13 runs and 15 hits in addition to taking advantage of four Lobos errors. For the second game in a row, Wheatland left too many men on base and could only see one player around the sacks. Kade Preuit and JP Anderson each had two hits for the Lobos. Anderson took the loss allowing six runs and six hits.

Sunday afternoon, July 10, the Lobos felt a different spark as they hit the Douglas Cats seven-to-four, but finally saw their opponents advance their baserunners at the right time when Lobos pitchers combined to put nine Cats down. on the base with steps. The Lobos held a two-way lead throughout the fifth inning when the late one-run rallies, but Douglas in a tie, then in a knockout victory late in the seventh inning. Langdon Goodrich took the loss for the Lobos. Anderson and Austin Warren each had two hits for the Lobos.

Wheatland played its final home games of the season on July 12 and lost two games to the always tough Cheyenne Hawks. Without allowing five runs in the fifth inning, the Lobos played a tied game with the Hawks tying them hit-for-hit, but again, field errors and nine walks were the difference. In the first game, Petroski suffered the loss while Preuit suffered the loss in the second game. Although Petroski suffered a bombardment on the mound, he had the hot bat 4-4.

Hicks, who has been playing ball since seventh grade, said, “I’ve played catcher a lot this year and I really like that and I think that’s my favorite position.”

Hicks traveled to Fort Benning, Georgia, for basic training and departed July 27. Hicks said it made him a little nervous to enter the service in an unstable global climate, but also said he was also very excited about the opportunity. His favorite memory as Lobo was winning the Spearfish Tournament in 2021.

Preuit said he would miss his teammates as he hung up his Lobos uniform for the last time. He will do double duty this week as he not only competes for the Lobos in the District Tournament, but will also play in the Wyoming North/South All-Star Game to be held at Casper College on July 23 at 5 p.m. at the T-Gym. Bird from Casper College.

“I started playing ball 15 years ago,” Preuit said. “This year, the outfield is familiar to me, and I think I didn’t throw too badly, I guess.”

Whitfield, who attends St. John’s University, has been asked to join the baseball team and is seriously considering it. Whitfield has been playing baseball since he was 6 years old.

“I’m going to miss it,” Whitfield said. “I love it because it’s a team sport and too many athletes forget that today. It’s really weird to put my glove down here for the last time. Last year we had districts here and I kind of had a feeling that I’d be back for another year, but now it’s like, holy cow…it’s real.

Goodrich used a word when asked what it would be like to play his last match at the Lobo home ground. “Interesting.”

“I actually thought that day would never come,” Goodrich said. “It’s definitely not something you think about when you start playing. I started playing when I was 3 or 4 at T-ball. There are times when I wish I had a few more years, but then you realize it has to end.

He said his favorite position is first base because of the amount of action he sees.

Why Parents Are Following Eva Mendes’ Screen-Free Summer for Kids