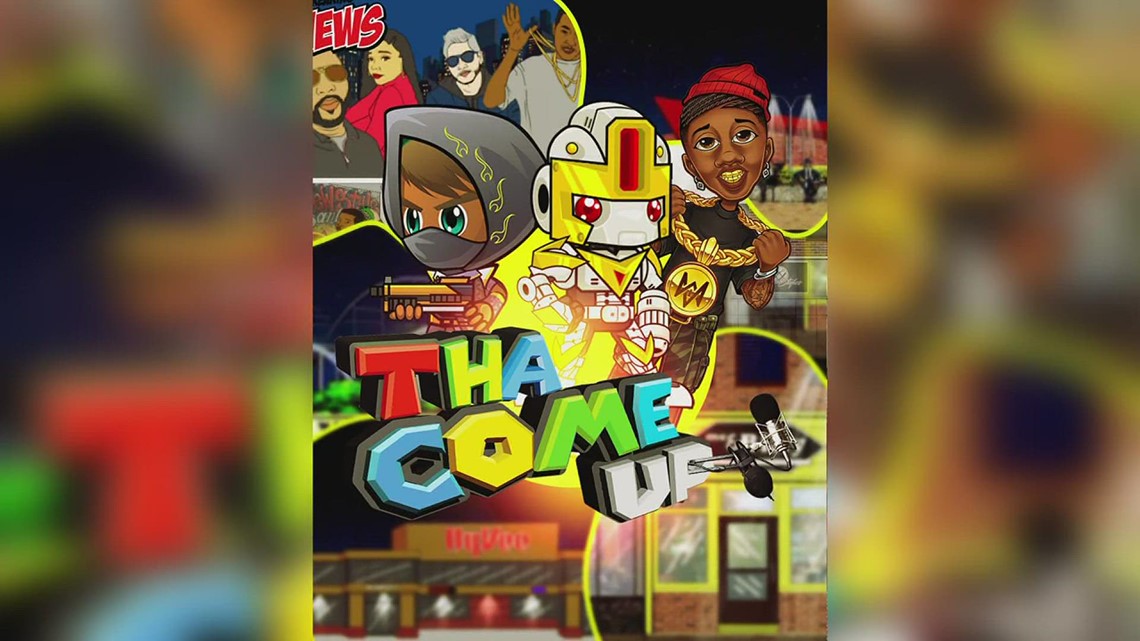 It took Bill Ellis about six years to create “Tha Come Up,” but now he says it’s not just a tribute to his hometown, but a message to never give up.

ROCK ISLAND, Ill. — These are the Quad Cities like you’ve never seen them before. After years of work, a QC native has created a video game set in the Quad Cities and featuring several familiar icons and businesses.

William ‘Bill’ Ellis is the creator and designer of “It’s rising,” a game where characters move through levels collecting stars and microphones, while battling monsters and trolls.

But for those familiar with the Quad Cities, the background of its levels is quite recognizable. As the characters jump and head for a win, digital paintings of Rock Island-Milan High School, Adler Theater, Me & Billy, Main Street Coffee, Modern Woodmen, Bolt Motors, Yoshi Tronics, Quality Construction and other Quad Cities businesses slip ahead.

Ellis grew up on Rock Island and has since moved to Moline and then Bettendorf. When he decided to try his hand at creating a virtual world, he knew his home would be the perfect setting to place it all.

“The first level was Rock Island, but the next level I did was downtown Davenport,” Ellis said. “I took a lot of businesses from this area that I liked and used to shop at and use them in the game.”

But there are even more local ties to his game.

QC artist Sedrick McDowell hand-drawn some of the artwork and helped fellow Quad Cities musician TY Fouse with all the music.

For Ellis, keeping that local flavor was a no-brainer, given the wealth of local talent.

“It’s really a little Hollywood in the middle of the Midwest, you know. We’re not very big, but we’re very active and literally anything that can be done, I’ve seen it here,” he said. declared.

However, it was not easy for him to get there. He spent six years designing, imagining and building “Tha Come Up”. Along the way, he had to learn every step himself.

“No schooling was involved,” Ellis said. “Lots of YouTube studying, I’m not going to lie. Lots of YouTube, lots of Google and lots of reading. But it was fun!”

His own children helped throughout the process, although Ellis jokes that they find it hard to believe he will ever finish the game.

“A lot of people started thinking I was crazy for even thinking of that idea,” he laughed. At one point, he said he even started walking away from the project. “But when we were in quarantine, you had to find something to do. And that’s what me and my kids did.”

The game is a tribute to his own children and the hometown he loves so much.

“It’s a beautiful place. It’s a great place to grow. You can do anything here,” Ellis said. “You can plant a seed here and it will grow.”

But at the end of the day, Ellis says “Tha Come Up” is also a message.

“You can do whatever you want to do. Anything. Make up your mind and you can do it,” Ellis said. “I’m an old man and I can do it.”

Now his game is out for the public and has two levels. Although it is only available on google play for now, Ellis plans to have “Tha Come Up” on the Apple App Store by this summer.

This month of June will mark the first anniversary of the launch of his game. To celebrate, he is working on a third tier that will encompass even more Quad Cities and wants to feature more businesses.