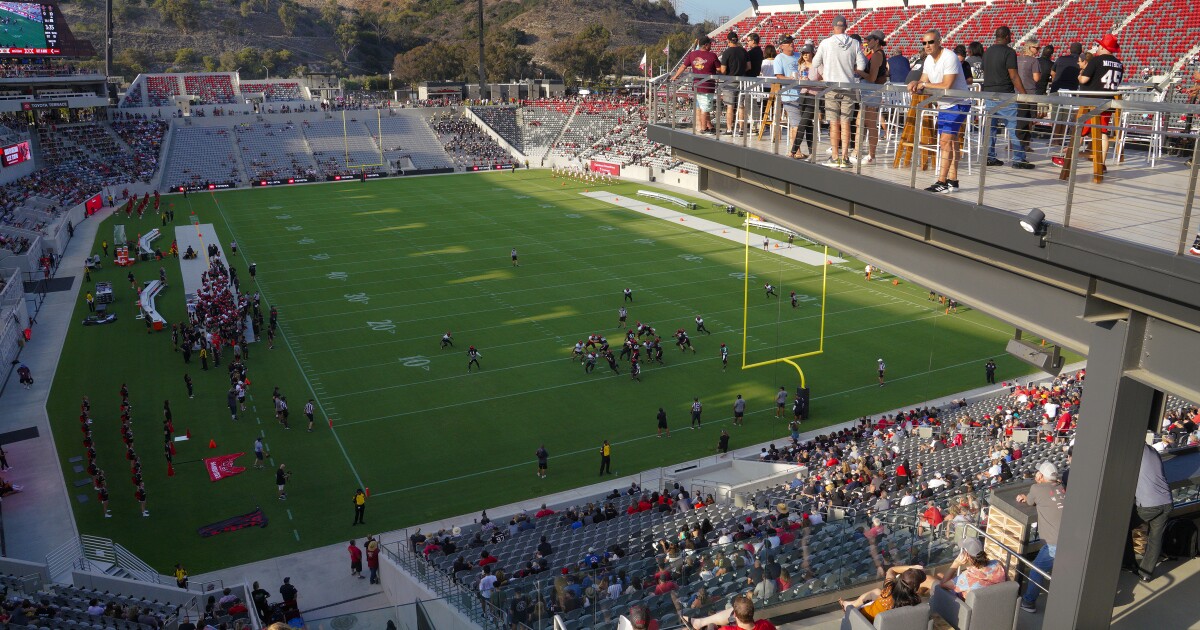 Two years after work began to raze the brutalist Mission Valley football stadium, San Diego State University presents the $310 million, 35,000-capacity replacement site that it hopes will it will become the sports and entertainment epicenter of the city.

On Saturday night, the venue, named Snapdragon Stadium, opened its doors to 15,000 Aztec season ticket holders who were invited to watch the college football team play in an intrasquad scrimmage. The practice game also marked the first time the players were able to step onto the pitch – or even train – in their splashy new home.

The dress rehearsal was designed as a “stress test” to monitor the stadium’s ticket processing system, food and beverage operations, and the ebb and flow of crowds as they move from parking lots to seats and to bars and bathrooms, said John David Wicker, who is SDSU’s athletic director.

Of course, the school also hopes to dazzle attendees with the big picture: an all-new stadium with high-end experiences and a window into the future of the entire 166-acre site that many associate with the former San Diego Chargers professional football team.

“It’s a great moment,” said Sarah Eishen, 53, who leads the Marching Aztecs Alumni group and has a tattoo of the school mascot behind her right shoulder.

Eishen, who visited the stadium’s exclusive Nova Bar at the Sycuan Piers before the start of the scrimmage, dismissed criticism she saw on Twitter calling the venue a high school stadium or ill-suited for tailgating.

“I think people are going to be blown away by the stadium,” the Rancho Peñasquitos resident said.

The school has designed a variety of experiences for people with benefits and exclusivity increasing along with the price of places.

The most extravagant seats are those in the four Founders Suites overlooking the midfield. The suites require a 15-year commitment for an all-inclusive price of $3.75 million and can accommodate 30 people.

Suite guests also have access to other upscale spaces, including Piers Bars, East and West Clubs, and the Cox Business Field Club. The latter space provides direct access to the pitch for matchday selfies, allows people to watch players exit the tunnel and run onto the pitch, and allows post-match press conferences to be viewed.

San Diego State has sold its 20 luxury boxes, along with most seats in its premium and club sections, a spokesperson said. The only remaining premium seats are in the East Club and Toyota Terrace.

However, everyone has access to social spaces. At the Scoreboard Bar, located on the northwest platform above the press box, visitors can admire elevated and expansive views of Mission Valley and pose for photos under the Snapdragon Stadium sign. And on the ground level of the Northeast Corner Dos Equis Bar, people will find bits of concrete from the old stadium, which have been reused as paving stones.

The Scripps Ranch resident, whose standard ticket does not include entry to the club, said he was impressed with the stadium as he took in the views with his girlfriend at Scoreboard Bar.

Olmstead reported no major issues with parking or entering the stadium, and are happy with their seat, which is on the west side of the stadium, which was completely shaded by playing time.

“It was on purpose,” he said of the west side seating, citing a desire to avoid the heat of the “sunny side.”

The stadium sports a number of hidden gems. For example, the yellow shoe prints honor service members who must stand on similar painted footprints when they first arrive as recruits at the Marine Corps Recruit Depot in San Diego. The school also saved the seats of Aztecs super fan Tom Ables and found a new home for the statue of Jack Murphy and his dog Abe, which was first unveiled days before the old stadium was n is hosting its third and final Super Bowl. The statue is now located outside the north entrance of Snapdragon Stadium.

There are also handrails in the student section – in case students need to get ready by standing and cheering.

“I didn’t want it to be a cookie-cutter football stadium,” Wicker said. “I wanted it to be something that everyone in San Diego could really walk into and find something to grab and say, ‘Hey, that’s relevant to me. “”

The special touches haven’t been lost on Chandra Dixon, 32, who holds a first season ticket for the Aztecs. Dixon attended the Saturday night scrimmage with her husband, two children and other extended family members.

“I’m amazed. I love him. I’m thrilled to be making these memories with my kids,” Dixon said, near tears. “I attended Aztecs games with my great-grandmother when I was a child. So being able to bring (my five year old daughter) is like another level.

Years in the making, the new stadium is a testament to the perseverance of school boosters, as well as San Diegans’ preference to see the hometown institution, not a competing development team, redo the Mission Valley site of the town. In November 2018, voters approved the sale of the stadium site to the university, which then purchased 135 acres of land along Friars Road in August 2020 for $88 million. The transaction was characterized by the city as its largest land sale in recent history.

The entire campus project, known as SDSU Mission Valley, requires 4,600 residential units, 80 acres of parks and open space, 1.6 million square feet of office and research space, 400 hotel rooms and 95,000 square feet of on-campus retail. A 34-acre city-owned river park is expected to be completed by the end of 2023.

Best games that feature The Predator