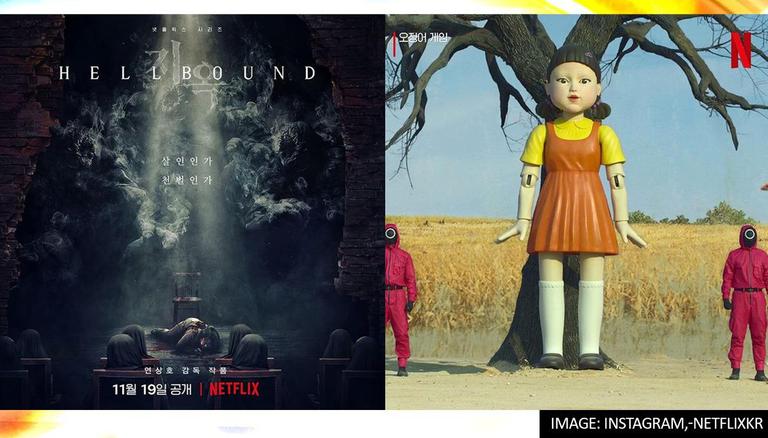 After the global phenomenon Squid Game, another South Korean horror-thriller title Hellbound is reigning over Netflix within only a few days of its release. The new gory thriller series has managed to oust the popular survival drama series Squid Game which drew over 111 million viewers worldwide on the streaming giant. Hellbound is directed by Yeon Sang-ho who also helmed the critically acclaimed zombie thriller Train to Busan.

As per The Guardian, the FlixPatrol analytics confirmed that Yoo Ah-in and Park Jung Min starrer thriller Hellbound became the most-watched TV series on Netflix on November 23. Within 24 hours of its debut on the streamer, the show topped the streaming charts of over 80 countries beating Squid Game who spent 46 nonconsecutive days on the top of the chart.

Inspired by one of the most popular webtoons in South Korea, the series revolves around angels coming to earth to condemn humans to hell. Yoo Ah In essays the role of Jeong Jin-soo, a cult leader and the head of the emerging religion ‘New Truth Society’. Meanwhile, Park Jeong-min plays a Broadcasting Station PD named Bae Young-Jae. Other cast members include Kim Hyun-Joo, Won Jin-ah, and Yang Ik-June.

Director Yeon Sang-ho opened up about the series in an interview with PTI as he stated, ” These characters are the people we see in society. They have different convictions and emotions. The viewers can resonate with them, depending on which conviction they choose to believe in. It’s fun to watch a clash of these convictions, it gives us an opportunity to think about our society … I hope ‘Hellbound’ is not just consumed but also gives food for thought. ”

He further added, ” The first game in this playground is this live-action series. I could add a lot of film-like aspects to it … The setting is realistic and drastic, and inside that world, we can see different types of people. “According to the official synopsis,” Hellbound “is a story about otherworldly beings who appear out of nowhere to issue a decree and condemn individuals to hell. ”

Get the latest entertainment news from India & around the world. Now follow your favorite television celebs and telly updates. Republic World is your one-stop destination for trending Bollywood news. Tune in today to stay updated with all the latest news and headlines from the world of entertainment.